Alentejo has a more than two thousand years old unbroken tradition for clay-aged wines. The area now experiences a fashion for these wines, and in 2010 a specific DOC was even awarded.

Talha is a large clay container. They come in different sizes and degree of porosity, but they are definitely recognizable. Since they are porous, most are sealed inside. Most common is a form of resin, mixed with other ingredients. The tradition has been kept alive by local restaurants. Now the number of commercial producers that take up the tradition is still increasing.

Here is a short version of how the wines are typically made: The grapes are pressed and transferred to the talha, where a spontaneous natural fermentation takes place. During this period, the grape and skins float to the surface and forms a thick mass. This is pressed down with a piece of wood to extract the color, aroma and taste of the wine. Fermentation is completed, and the mass sinks to the bottom. When the wine runs through a hole at the bottom of the jar, this mass helps to filter, together with straw designed for the purpose. 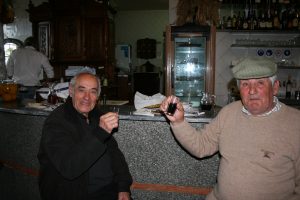 The grapes are picked in September, transported into the wine house, pressed, then transferred to the jars – with or without stem. During fermentation, batonnage is carried out. The mass is pushed down twice a day to extract colour and flavour, but also to prevent it from blocking the opening and the jar exploding. As a rule, the fermentation is completed 8-15 days after the grapes are placed in the jar, so it takes a few weeks for the lid to sink to the bottom. For many, the wine is now finished and the drinking can start. Traditional restaurants usually serve it more or less directly from the “talha”. The modern, commercial wine houses usually leave the wine on the steel tank, some place it, surprisingly maybe, in oak barrels. Traditionists put the wine back on the jars. These are often covered with lid of wood, clay, cardboard or anything. A more effective protection against oxidation is olive oil, which is poured into the jar.

The DOC Vinho de Talha was created to preserve tradition. The regulation states, among other things, that the grapes must be cultivated within the 8 subregions of DOC Alentejo, they must be rejected, fermentation must be done in closed containers (talhas) and the wine and grape must remain in the jars until 11th November. One can store the wine longer, but this is the day when official officials come to certify the wine. This is St. Martin’s Day and traditionally the day one drank the wine for the first time that year. Martin from Tours was a soldier for the Romans, but became Christian as an adult and then lived as a monk. In Portugal, the day is primarily associated with celebration of the new wine.

Moreto is the grape variety that stands out as the traditional bearer. But the tendency is that other grape varieties are used, and the wine spends less time in the vessels in contact with the skins. 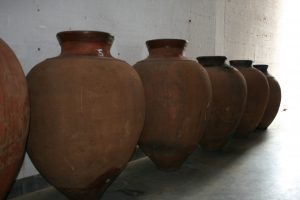 Herdade do Esporão is a property that can actually track its borders back to the 13th century. It was purchased by two private individuals in 1973. The first wines came on the market in the 1990s, and almost instantly it was a huge success.

It’s maybe of importance that a large company like Esporão participates in the collective talha experiment that is now taking place in the area, because those who no one else can register and catalogud knowledge and experience. Perhaps they can also help promote the Alentejo region to consumers.

Esporão inserts the jars with beeswax (made after a complicated recipe), to avoid anything evaporating. This certainly gives some taste to the wine, or rather: it reacts with the wine. To avoid oxidation, a layer of olive oil is placed on top of the talha.

Their Vinho de Talha is only sold in the house’s own shop, to keep an image of exclusivity, it is said. The 2014 vintage comes from old, rented vineyards in the cool Portalegre sub-region to the north, high in the São Mamede mountains, with varieties moreto, castelão and trincadeira. The grapes were picked late in the autumn, end of October-beginning November. No SO2 is added and the yeast is completely natural.

The wine makers are David Baverstock and Sandra Alves. 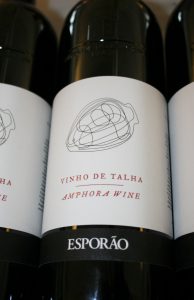 The wine is relatively light ruby. Aroma of red berries (ripe raspberries) with flowers, some spice and liquorice. Intense fruit on the palate, fresh acidity (typical of northern Alentejo), elegant tannin, and some sweetness at the end.