In the caves of Granada: Bodegas Cauzón

Ramón Saavedra is waiting in the main square when I arrive in Graena, a small village east of Granada. Otherwise it might have been difficult to find his home among all the other houses that apparently look the same.

Apparently. Because, as we shall see, when we enter the bodega area behind the house this is all but ordinary. 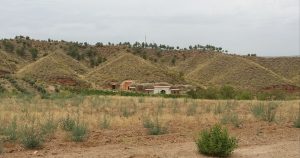 The municipality is called Cortes y Graena and is comprised of four villages. The word Graena is of Arabic origin, and the caves are a legacy of the Arab Andalusian period. A most special feature here are the thermal waters. In fact the name of the bodega is also inspired by the Moors; al-cauzon meaning something like the land of the sand.

Ramón Saavedra returned to his village to take over inherited land that he later planted with vines. He had then been working with Manuel Valenzuela of Barranco Oscuro, to help with pruning etc. In 1998 his first harvest was finally bottled.

The soil is sandy-clayey and calcareous with big, round stones. There is continental climate, with extreme summers with more than 25ºC difference between day and night in the maturation period.

It’s a perfect place to make organic and natural wines, but since his own wines express such a crystal clear idea, I’m maybe a bit surprised by Ramón’s pragmatic attitude about the trade in general.

-Well, for me it’s not only about health, it’s about the balance in nature. I wish that my wine should expressing the earth. But I respect everybody. However I wish that the communication is clear, what you say is what you do. 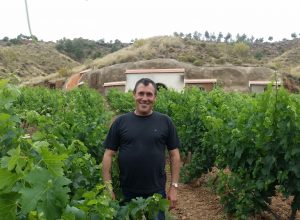 The grape variety next to the caves is garnacha. -I love the green, living colour, says Ramón

Ecological cultivation, manual harvest, natural production. Wines without added sulfites and fermented with their own yeasts. Without additives of any kind. Its maximum annual production is 20,000 bot.

There are 7 parcels and a total of 6 hectars, all in the Graena village. Here are a lot of field blends from the old days. The cactus both delimits the vineyards and have a function in the biodiversity. Sheep compost is used as fertilizer. 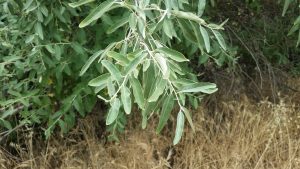 -The panjil tree (also called Bohemian olive, or olive of Paradise) has a strong and inviting aroma, so the insects come here instead of attacking the vineyards, says Ramón. The Moorish people had a lot of knowledge about this. 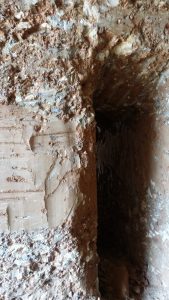 Work has begun to make a new bodega

-In the old times people were living here. Now I also see a possibility for tourism. We wish to offer a form of rural accommodation here. 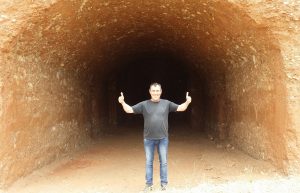 Thumbs up for a new bodega within two years!

We had the time for a tasting too. I will not bore my reader with the tank and barrel samples along the way. But here is a brief tale about the bottled wines. The white Cauzón 2015 from torrontés and some chardonnay, viognier and sauvignon blanc was dark orange, very juicy, grapey, elegant and smooth, but very sapid too. Duende 2015, a dark syrah from 1.200 meters of altitude, had violet, eucalyptus and other balsamic notes, wild berries and leather, nice fruit in the mouth, with bright acidity and pleasant tannins. The 6,5 grams of acidity comes from the high altitude. 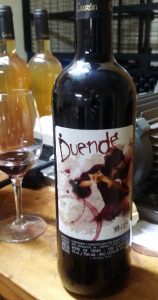 Cauzón 2015 red from tempranillo was difficult because of the lack of rain. Therefore we don’t find the same fruitiness, says Ramón, who is quick to fetch the same wine in version 2014, just to compare. This one clearly has more fruity berry notes, spice, and it tastes younger, overall. The Ira Dei 2014, tempranillo (or tinta fina), garnacha, cabernet sauvignon and merlot, partly from ungrafted stocks, has ripe fruit, some lickorice, but also a lot of freshness. The mouthfeel is quite dry due to more maceration of the three last grapes, but the fruit is there all the time. Lastly we tasted the Pi Noir 2014, and this was a concentrated pinot, also with some volatile, but with a fruity aroma with red berries in the forefront. Cauzor 2009 showed some sign of ageing towards the rim, but was in a good shape. It has some plum confit in the aroma, but there are fresh fruits too, and is delicious now. 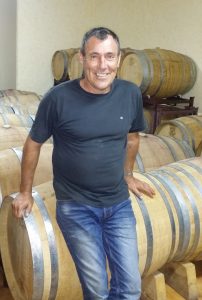 Ramón Saavedra, always energetic and enthusiastic, and a distinctive voice on the Spanish wine-scene

A Swiss project in New Zealand

This is a project that started in the late 80s, formed by Swiss Georg and Ruth Fromm together with winemaker Hatsch Kalberer, all of them with knowledge about the wines of both European and New Zealand. It didn’t take long before they decided to join forces, set up a winery in Marlborough, and the first plantings were done in 1992. The Fromm’s returned to Switzerland some years ago, but Hatsch continues to release one superb wine after another, not least the country’s oldest single vineyard malbec, called “H” for Hatsch.

This wine is a 100% pinot noir. It was spontaneously fermented in steel tanks with a long maceration.  

Brilliant ruby red. Fresh on the nose, with raspberries, plums and aromatic herbs. Luscious, rounded mouthfeel, long aftertaste with a well-integrated acidity that lasts all the way. It has stayed on the shelves for some time (2015 also released), and must be near its peak now.

Rita Marques is one of the new Douro comets. She has some terrific reds, such as a very personal take on the red bastardo variety, and some good ports too. But it’s maybe the whites that most of all cought my attention from the beginning, with their purity, freshness and elegance.

She is found by the Teja river, a tributary to the Douro that ends near Symington’s Vesúvio estate.

This wine is made from very old vines, primarily of the rabigato and côdega do larinho varieties (40% each), with arinto.

The must was spontaneously fermented and raised in inox tanks and used oak, with 5 months on the lees. It clocks in at a mere 13% alcohol.

Light yellow, greenish hue. Flowery aroma, slightly waxy, with peaches and pears, and herbs underneath. Full on the palate, a salty minerality and with a limey acidity in a long aftertaste.

Bargain from the “Tierra” of Cuenca

In the Cuenca province, along the road between Madrid and Albacete, we find Dominio de Punctum. When we visited some years ago the Fernández family already impressed with splendid value wines from rather young vines. The quality is steadily improving since then.

Their production comes from their own vineyards, the “Finca Fabián” estate that currently includes more than 200 hectares. Here they have always worked in a traditional organic way, now biodynamic practises mark a further step.

Visit in the vineyard

This wine, with the denomination Tierra de Castilla, is made from tempranillo 70%, complemented with petit verdot. As many will know, tempranillo is the prevailing Spanish grape, earlier called cencibel here (a fact people seem to have forgotten). Petit verdot is known from Bordeaux, but has long become a classic in Spain. Harvest was done at night, fermentation with natural yeasts carried out in inox between 24º and 27º C, and finally the wine was only lightly filtered.

Cherry red with violet rim. Notes of red berries, some blackberry and herbs. Tasty, with rounded tannins, and quite persistent.

A day for Tempranillo

It seems to be a day for everything. Since 2011 the TAPAS (‘tempranillo advocates, producers and amigos society’) of North America has celebrated this grape, the world’s 4th in extension.

They picked the second Thursday in November, which means the coming 9th November this year. And many of the grape’s many international followers have – followed.

I miss no opportunity to open a bottle of tempranillo wine. They come in many variations, different clones and synonyms too (more than 60 in its native Spain alone), but one clone has the ability to show huge differences in terroir.

Needless to say, there are a huge amount of wines to chose from. I select one from my most recent wine trip, that included one day in Rioja. Here Sandra Bravo has released some magnificent and original wines since 2012. The clayey/chalky vineyards are found at 650 meters altitude between Labastida and the Sierra de Toloño (a part of the Cantabrian mountain range). The wines are kept in a rented bodega in Villabuena de Álava – all this to the east-northeast of Haro, for those who are not quite familiar with the landscape.

Sandra Bravo in the Villabuena cellar

The wine in question is her “basic” red. It was in fact the first wine in Rioja to be elevated in clay amphora. There are now several vintages on the market. I chose 2014 as I think it has a perfect development right now, though it will keep. The cultivation is organic, the must was fermented with natural yeasts in steel, clay and cement, and it spent some 6 months in used French oak barrels.