Being a musician I had visited the superb saxophone shop in the village of Crowborough, East Sussex many times. It wasn’t until I prepared to go to the Real Wine fair that I realized that Britain’s leading organic wine estate was only five minutes away. (Read more about the sparkling wines of the fair, including Davenport here.)

And it’s maybe “fizz” that is leading the way for British wine. Nevertheless, more and more good still wines are made.

Will Davenport makes use of natural methods when possible. Natural yeasts, no fining, racking instead of filtering, these are some of the key elements.

Will Davenport at the Sussex farm

The winery is located in Rotherfield, Sussex, but he started out in Horsmonden, just over the border to Kent, with 1993 as the first vintage. The wine that bears this name is ,a blend of five aromatic, mainly German crossings: Bacchus, faber, siegerrebe, huxelrebe – and the rare ortega (named after the Spanish poet), that is particularly associated with this winery, not least since Will makes the wine for Forty Hall, who grows it in Enfield, London.

The wine clocks in at no more than 11.5% alcohol

Straw yellow. Aromas of white flowers, lychee, peach. Quite full in the mouth, acidity amidst the fruitiness, with a tiny amount of bubbles that add to the freshness.

Food: A variety of fish and shellfish, cheeses, light meat

Federico Schatz has been a leading figure on the Andalusian wine scene for many years. He came here from Süd-Tirol, the German speaking area in the north of Italy. And before that his family came from Baden Württemberg, where they had been involved in viticulture since 1641. So his real name is Friedrich, but here he is Federico. Year after year he puts out remarkable wines, for long the same six wines that form his last name when placed side by side. Treasure, it translates. 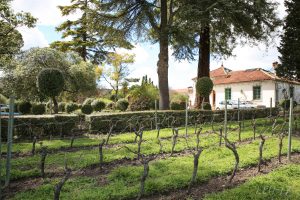 The vineyard extends in a gentle slope to the south with a deep soil with silt loam, clay and sand. This secures a healthy soil because of the good aeration and permeability. In 1982 he planted new strains to study the plants’ behavior. As a result 3 hectares were planted with his chosen varieties.

This time I had an appointment to come and taste his new vintages. It was nice to see his label designer being there doing the same. After a while a distributor joined in with some guests. Everything very familiar and very Spanish.

On to the wines, that we tasted in a slightly different succession than put after another by the labels.

S Chardonnay 2016: This is a sample, almost finished though and will be released shortly. It was fermented with native yeasts, was aged on its lees in French oak for 5 months (with some batonnage), and is now in steel. 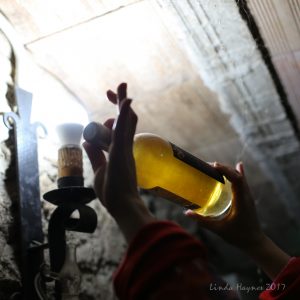 Z Rosado 2016: This has long been one of the most personal and complex rosé wines around. It used to be made from the muskat-trollinger grape, now it’s moscatel negro. And it does not disappoint. This one is treated much the same way as the white wine, except for three days of maceration (as opposed to one).

Light red (dark for a rosé). Violets, raspberry and some balsamic notes. Dry in the mouth, good volume.

The reds ferment in open tubs for one to two weeks. The alcoholic fermentation of the red wines is carried out at a controlled temperature with native yeasts in open vats, manual pressing down several times a day. Malolactic fermentation is carried out in deposit, then aged in barrel (French, American and Central European) for up to 6 months, the lees removed once in a while.

H Acinipo 2009: Named after the Roman ruins just down the road, the name meaning “land of wine” in pre-Roman language. The wine is made from the variety lemberger, more officially called blaufränkisch and much more used further north and east in Europe. The toasting of the oak varies according to grape variety. This one requires a careful treatment.

It has good colour for a lemberger. It has a balsamic smell (mynth), some laurel, flowers. I’m the mouth it’s rounded, but with some tannins too and good acidity.

C Pinot Noir 2010: One year in oak, more toasted than for the previous wine.

It has a good colour, dark young ruby. The aroma is quite tricky, forest fruits with some cigar-box and chocolate (reminding of both another grape and another place, you guessed it: cabernet sauvignon and Bordeaux), but red fruits too. Full on the palate with a certain dry texture, spicy with some cocoa.

A Finca Sanguijuela 2010(?): The wine that takes the name from the farm is a blend of some of the grape varieties grown there, cabernet sauvignon, merlot, tempranillo and syrah, in approximately even quantities.

Dark red. Aromas of red fruits, cherry, lavender, rosemary, a touch of oak. In the mouth it has some dryness, I suppose from grape, soil and oak, some cocoa, and a long aftertaste.

T Petit Verdot 2010: Darker, deep purple, shows no signs of wear. Complex nose; balsamic/medicinal notes, red berries (cherry, plums), tobacco, some underwood too. Quite dry in the mouth, partly from 12 months in oak and heavier toast, but with a fresh acidity too.

Again, the Schatz portfolio delivers as expected. If you ask me which are my favourites (some already did), it’s difficult. The rosé is obviously a star, but the white is good in its category, and I have long been weak for the Acinipo (and not only for the name). But all of them have a mission. They are made to go with food. They are made for happy gatherings, for tapas tables, for a garden grill. According to Federico the Petit Verdot can even match desserts like brownies. It has many times proved that it’s at home with meat from animals with horns. But brownies: Must try!

We are going on a summer holiday…

Retsina may evoke memories of sunny days, white-washed walls and lots of meze. This may also be one of the wines that taste good on a summer holiday, but maybe not as appealing back home.

Ρετσίνα is a Greek resinated wine with more than 2000 years of history. In ancient times the wine vessels, particularly amphorae, were sealed with pine resin, that protected the wine against oxidation and gave it the unique resin-like flavour. With the times, after the introduction of glass bottles, it became a wanted taste, something that defined the style. Until one day when retsina found itself as little more than a souvenir.

But those days can soon be over. Here is a wine from organically grown grapes, modern in most ways, except the pine resin that is added to the must during fermentation. The grape is roditis, second or third in importance (after saveatiano). Today much less resin is needed. Some may miss that strong smell of “turpentine”, but for the most of us it’s now a modern wine with a strong character that is undoubtedly linked to the islands and mainland of Greece.

The Tetramythos winery is located on northern Peloponnese, near the mountain Aroania in Achaia. Here they have built a winery with wood and stone, and in harmony with the surroundings. It makes use of gravity and has all the modern equipment to make a panorama of wines, including that age-old traditional retsina style.

The grapes are all roditis spontaneously fermented in clay pots.

Golden yellow. Aromas of apples, citrus, herbs (rosemary, thyme) and an evident but discrete element of pine resin. Round, mellow with low acidity.

Food: Grilled seafood, squid, white fish, a variety of meze, and why not with garlic dips

In Venta del Moro, in DO Utiel-Requena in the western València province, is where the Sexto Elemento bodega is located. The vines where the grapes for this wine are sourced are around 70 years old. They are cultivated in a traditional manner, without chemical additions and no fertilization. The grapes are harvested when they are fully mature. The variety in question is bobal, a variety that didn’t have a good reputation in the past, but for Sexto Elemento it’s extraordinary and present in the area for centuries.

There was a long maceration in deposits of 1000 liters at low temperatures (18-24ºC). The fermentation started with only natural yeasts and was carried out in barriques, and the wine had a year of ageing in French and American oak over fine lees with periodically stirring. And the 6th element? Wine, according to the producer.

Dark cherry red. Mature fruit, flowery, blackcurrant, cherries and a hint of toffee. Rich and round in the mouth, with rounded tannins and some sweetness from the fruit.

This is a Côte de Roussillon Village from a tasting of Catalan wines from both sides of the border. The tasting featured mostly wines from carignan and grenache, both of Spanish origin, but some had small amounts of other varieties. This is a blend of carignan, grenache with syrah and mourvèdre.

Domaine Gauby is located 20 km north-west of Perpignan and extends over about 85 hectares of which 45 hectares of vines up to 125 years old, the rest meadows, oak forests and scrubland. Here we find varied terroirs composed of limestones, marls and slate.

Enologist Tom Lubbe has been a very important figure for this region, and under him Gauby was leading the way in the reviving of this old viticultural region. He had crossed many borders before he came here; born in New Zealand, worked in South Africa’s Swartland, then arrived here. He has been involved in the production of both Gauby and Majas, before he now is leading the neighbouring Matassa project (and married to Gérard Gauby’s sister).

This grapes for this wine was sourced from sedimentary limestone and slate, the carignan, 125 years. The vinification was traditional, 100% de-stemming, maceration 2 to 4 weeks, and use of native yeasts. Two years in barrel, obviously used (no taste of oak worth mentioning), no fining nor filtering.

Bodegas Valduero of Gumiel de Marcado (Burgos) has a collaboration with Goyo García Viadero, reputed winegrower. This one is made by Goyo’s sisters Yolanda and Carolina. The wine is made in Ribera del Duero land, but it does not have a designation Ribera, simply because the DO doesn’t allow white wines.

Albillo is in this case the albillo mayor, prominent grape of the Burgos and Valladolid provinces, as opposed to the albillo real found elsewhere in Castilla and beyond. They share some characteristics though, with grapefruit hints and fullness. Back in the old days they used to be found among the black grapes in the same vineyards.

These albillos are 12 years old and trained as bush vines (‘en vaso’ in Spanish). The fermentation was made with autoctonous yeast, at around 19-20º C, and the wine has not been subject to oak treatment.

Straw yellow. Aromas of pine, berbs, and a slight touch of grapefruit. Full on the palate, round with just enough acidity to balance. Very clean, inspiring