The red Drago has become my go-to Valpolicella. Last time it was featured here was in this article, where you also get some background.

It originates on the Monte del Drago hill, with a total vineyard area of 8 hectares. The grapes are organically cultivated, and biodynamic techniques are also employed. Corvina accounts for 60%, the rest is corvinone, rondinella and barbera. It has rested 12 months in French oak, which is barely noticeable.

Dark red. Aroma of dark and red berries (cherry), some herbs. Lucious, tasty and with an adequate acidity.

A nod to the Valpolicella of the past

Valpolicella was originally light to medium-bodied, refreshing, with a pleasing bitterness on the finish. Nothing to do with the dark, sweet, oaky or raisiny wines we have come to know. (Okay, amarone and ripasso have a rightful place in their context.) Monte Dall’Ora makes beautiful classical style wines.

The winery was founded by Carlo Venturini with his wife Alessandra in 1995. They bought some land in bad condition and started almost from scratch. They work the traditional varieties corvina, corvinone, rondinella, molinara, and also oseleta, an almost extinct grape that now is on the up.it was always organic, and in 2006 they converted to biodynamic agriculture.

They are found on the Castelrotto height, in San Giorgio, northwest from Verona. The soils are limestone with a reddish hue, quite special for this area, with a porous upper part. They train their vines in pergola. These varieties are vigourous and can easily grow to big bunches to control. Pergola gives air and space between the clusters, and you would also get smaller and concentrated bunches.

The actual wine is made up of 40% corvina, 30% corvinone and 20% rondinella, and a dash molinara. The vines for this traditional Valpolicella varieties were planted in 2008, trained on wires in guyot rather than in pergola for greater concentration. It’s harvested by hand in October, later than for the rest of their wines.

The grapes are destemmed and gently pressed. Spontaneous fermentation takes place with native yeasts and without sulfur in concrete and steel tanks, then maceration 7-8 days with occasional manual punch-downs. Aged 6 months in steel, then 6 months in old 25-hectoliter oak vessels bottled without filtration and only a small amount of sulphur.

Ruby red, just a bit cloudy. Aroma of cherries, white flowers and, wild raspberry. On the palate more pungent than it appears by the eye; with red currant, pomegranate, berry seed, and stony minerals. Lots of pleasure in this bottle!

Here is a short post from a wonderful Italian lakeside resort. Bardolino is located on the east side of lake Garda, not far from Verona in the Veneto province. There are many nice, fresh and juicy rosés and light red wines.

These hills are where the Gorgo Wine Estate was established in 1973. It belongs to the village of Custoza, and the company also makes organic certified biancos bearing that name.

This Bardolino wine is made from corvina 55%, rondinella 25&, and the rest divided between molinara, merlot and cabernet sauvignon grapes. It’s made with controlled temperature fermentation in stainless steel, and was pumped over for up to ten days.

Zýmē was the name of his consultance agency, and became the name of his own winery, when he in 2003 started with 7 ha. on rent. Now there are 30 ha., where ecosustainability and respect for the rhythms of nature are vital aspects. Zýmē, from Greek, means “yeast.” For Celestino this has a symbolic meaning as a continuous striving towards transformation. The logo represents a leaf, formed as a pentagon, which is a symbol of the five basic elements needed to make wine; soil, grapes, sun, water and man. 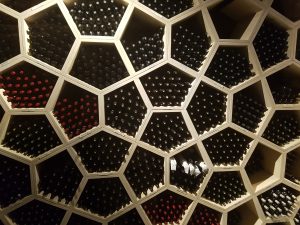 There were many good wines to chose from; Oseleta (a 100% varietal), Kairos (from 15 grapes, 4 white and 11 red), From Black to White (from a natural genetic mutation of Rondinella) and an Amarone Classico della Valpolicella on the dry, almost elegant side.

Still I chose the Recioto Amandorlato, a wine dedicated to the memory of Giuseppe “Bepi” Quintarelli, his father-in-law, who passed away in 2012. The wine was first presented at this year’s VinItaly.

Celestino describes Recioto Amandorlato as a synthesis between traditional recioto and amarone. One could say a recioto with the lowest possible sugar residue.

In the concrete tanks the temperature is natural, the yeast too, and there is very little movement of the must. The tumultuous fermentation stops due to the effect of sulfur, alcohol and residual sugar. Now the product is divided. Sugar tends to precipitate, so the first part removed is the one richest in sugar, the Recioto. The second part, in contact with the brandy, with less sugar, more organic substance and more extracted, becomes Amandorlato. (Then there is also Amarone Riserva.) 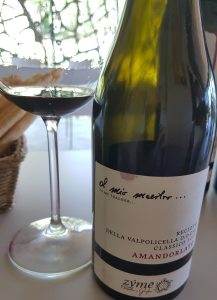 This is a very good value Valpolicella. The winery is established in an aristocratic villa from the 16th century, and has a beautiful agriturismo on the estate. The estate totals 400 hectares, including three vineyards on three different hills, with differences in soil composition and orientation.

This wine comes from the Monte del Drago hill, with a total vineyard area of 8 hectares. There are also some young (white) garganega and pinot bianco plantings, but the vines that gives the fruit to the Drago wine is mainly corvina planted in the 1990’s. The exposition is west, and the soil is tuff with white clay.   

The grapes are organically cultivated, and biodynamic techniques are also employed. Corvina makes up the highest proportion of the blend (60%), the rest corvinone, and 5% each of rondinella and, maybe a surprise: barbera. Winemaker Maddalena Pasqua let it rest for 12 months in French oak, which is barely noticeable.

Quite dark red, blueish hint. Aroma of dark and red berries (cherry), some herbs. Young, lucious, tasty and with a fresh acidity.