We are near the tiny village of El Pego near the southern border of Toro, Castilla y León. Aciano is a 3 hectare vineyard that Alvar de Dios Hernández inherited from his grandfather. The altitude is more than 700 meters, the soils here are sandy, quite special for this area. And for this reason the 100 years old ungrafted vines have survived the phylloxera plague. Aciano was his grandfather’s nickname, so the wine is baptized in his honour. The vineyard practise is organic and biodynamic.For this wine the grapes were hand harvested. 60% whole clusters, 3-4 day pre-fermentation maceration, natural yeast fermentation in big vat, daily soft pigeage, 20 day maceration are other keywords. The ageing was then done for 12-14 months in big, old French barrels, mostly neutral.

Alvar was born in El Pego, but he came in contact with Fernando García and Dani Landi of Sierra de Gredos, and was at a time cellar master for Fernando at Bodegas Marañones. (See various write-ups about the two around this blog; here is one.) Their influence can maybe explain Alvar’s search for coolness in his wines, and for Toro this must be a much needed fresh air. 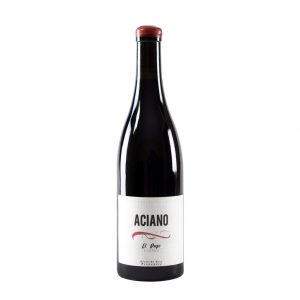 Dark cherry red. Perfumed aroma; flowers, dark and red fruits (blackberry, cherry), a slight touch of coffee. It’s tasty and quite solid, yes, but it’s not coarse-heavy-rough like toro can be, and the acidity is good, natural. The most elegant red from this appellation I have tasted for years.

Los Patios de Beatas is a favourite in Málaga, and whenever I arrive in the city it will never take long untill I head for a table in that culinary palace, hotel and cultural oasis.

Speaking of tables, please allow me a short sidestep before we get back to the restaurant. My wife had since she first saw the tables in the street and in the restaurant been an admirer of the work. So she took a picture of the signature, and looked up a facebook site. We soon found out that the artist lived in Mijas village. So we went to Mijas. There were no signs, no directions. But we didn’t give up: We talked to some locals, knocked on some doors, and suddenly we found ourselves in the artist’s living-room.

Joshua Van Den Eeden is of American and Flemish descendant; his parents met in Torremolinos in the 1960’s, and you have already realized that there is a romantic story that could be told. But we must make a short-cut: Joshua is now established with his home-workshop and gallery in Mijas. His tables are made of concrete, and the plates of copper and calcium. The turquoise colour comes from a reaction with air. Finally a glacier is put on top of it, to keep it from further development.

Among other projects are benches for the Mijas municipality. So remember, next time you are there you will maybe sit on the artwork that you see here. The wine map to the left is for a friend. Take a closer look, and you will see a more detailed map of Rioja than the current official one. (You can find more info here.)

Back in the old town of Málaga, Beatas is a small street where the people behind the restaurant have rehabilitated two houses from the 18th and 19th centuries, both architectural pearls of historic importance, and both with beautiful patios. This is the background to the restaurant’s name.

The driving force behind the project is Julián Sanjuán, who has studied oenology in Málaga and got his sommelier degree from Barcelona, and had already opened málaga wine museums both Ojén and Mijas, small towns in the Málaga province. He established Los Patios in 2012, and last year he also created a professional sommelier association in Málaga. With his network it’s then easy to understand why the restaurant is full of dedicated sommeliers that know how to describe a wine, and has the knowledge to pair wine and food successfully.

In the main floor there are three rooms with open doors between them, two are more normal restaurants, and one cosy bar where you sit on high stools at van den Erden’s tables. You can also buy the bottles that you see around you in the room and bring them home with you. In the next floor there are two dining rooms, a tasting room with natural light from an inside patio, and in the other jazz and flamenco concerts are held once in a while. The familiy also runs a small hotel in the other building.

Key words are varied wines from all over Spain (and some from outside), and creative dishes based on seasonal products. Worth mentioning, this is snob-free zone, and all the wines are for drinking, more than 500 references in total. Some restaurants with a much shorter wine-list have some show-wines like Vega Sicilias in old vintages that noone has the wallet to buy. Here there are a few really expensive wines, but the difference is -and while we are talking about Ribera del Duero- that the most expensive Vegas and Sastres are a logical continuation of an extensive list of wines from the Ribera. For Andalusian wines I can only think of one contender, Armando Guerras place in Sanlúcar de Barrameda. (Read about him here.) But for wines from the Málaga province you simply go to Los Patios.

After so many visits it’s difficult to pick just a few wines. I have tasted many local and regional wines, such as Sedella and Schatz from the Málaga province, the sherries of Ramiro Ibañez and Equipo Navazos from Cádiz. Sparklers from Recaredo (Cava), whites from Lagar de Pintos (Rías Baixas)and Avanthia (Valdeorras) and developed reds from Álvaro Palacios (Priorat), Ánima Negra (Mallorca) and Dominio de Atauta (Ribera del Duero) will rarely disappoint.

My last visit was earlier this year. I will always discuss with the sommeliers, of course, but this is the kind of place that I can let them get the last word, and I can easily trust that the wine will be good and the pairings successful. This time the first wine was Igualado 2014 a red blend from nearby Ronda bodega Joaquín Fernández. Dark, young colour; balsamic aroma (mint), peppery and spicy, with mature tannins, that went well with “ternera con foie” (veal with foie gras), even if I would suspect the wine to be too dominant. Next was “texturas de panceta”, different textures of pork belly, served with green puré and fennel. the different ingredients blended superbly, and the wine that Julián suggested, Vetus 2011 from Toro (dark, red berries, blackcurrant, morello and a touch of minty oak, mature and integrated tannins, a very elegant Toro) was interesting to see with the varying textures of the food.

Veal with fois, and a glass of Igualado

The Vetus bottle, and Julián talking to the next table

After numerous visits to central Spain I have learned to know Daniel Jiménez-Landi (now of Comando G fame and a great ambassador of the light extraction garnacha style). Here we could savour one of his earlier offerings, the Piélago 2010. This Méntrida garnacha was quite hard in its younger years, but after some time in Los Patios’ cellar it had mellowed, and it was perfect with the lamb and quinoa dish.

Piélago with lamb and quinoa

This was a unusual night in that we had only red wines. But you don’t always need to start with a champagne and end with a dessert wine and a grappa, do you? This particular night we ended with the fabulous Acinipo 2006 from a good friend, Ronda wine producer Friedrich Schatz. And this because the party had already wanted to order a plate of cheeses, a selection with predominantly hard cheeses, so I thought why not. Schatz is originally from Süd-Tirol, and the wine is made from the variety lemberger, a synonym for blaufränkisch. It’s quite different from the more northern-eastern wines though. Named after the Roman ruins further down the road, this wine is quite full-bodied with the dryness in the aftertaste that can be found in this producer’s wines, a feature that makes them go well with a variety of dishes.

On your first visit to Málaga, go to El Pimpi and the Antigua Casa de Guardia, because they are picturesque places and important for the city’s culinary history, and you will get decent tapas there. But once familiar with Málaga they are maybe not the places you will keep coming back to. Los Patios is a place that you never get tired of.