Published 19. May 2018 by Vidar Kenneth Johansen

No, Juan García is not a footballer in the Spanish second division. It’s a local hero grape variety with some potential for stardom on a national level.

The grape is most likely to be found in western Castilla, towards the border with Portugal, and it’s maybe at its best in Arribes del Duero. There are not many varietals made though. It was traditionally used to strengthen wines from garnacha and other soft-skinned grapes. Arribes is one of the oldest wine growing regions in Spain, with roots back to the Phoenicians. But it wasn’t untill the 1990’s that they started to create a DO region, that today covers only 600 hectares of vineyard. 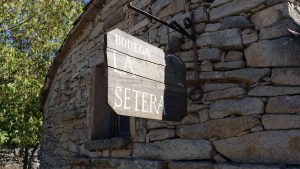 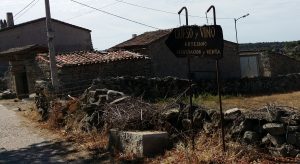 The bodega is located in Fornillos de Fermoselle, between Salamanca and Zamora. From here you can look over the border to the Portuguese side of the Duero/Douro river. La Setera means she who handles muschrooms (after seta = mushroom). But the winery is equally famous for making artisanal cheese from the local goat and cow’s milk. They have also started to make beer. Patxi and his wife Sarah have six hectares of own vineyards in Fermoselle and the neighbouring Pinilla. It’s almost exclusively old vines, with Spanish and Portuguese grape varieties such as tempranillo, touriga nacional, bruñal, rufete, alongside red verdeja (sic!). They also do some experiments with amphora, resulting in a juan garcía-mencía-bruñal-bastardo-rufete wine called Tinaja Crianza, aged first in clay, then oak.

The tinto joven is made as a joven in steel tanks, to accentuate the fruitiness, and it’s 100% juan garcía. This is really small-scale with only 2.000 bottles made of the young entry-level wine. 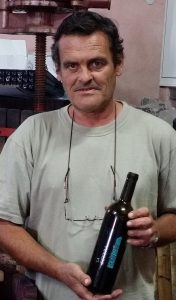 Dark cherry red with violet rim. Wild berries, elderberry, pepper, stony minerals. It’s very fresh, textural, with evident tannins, carbonic traces and a light bitterness in the finish. You could maybe call it a bit rustic, but I love it.

Food: A variety of meat, such as game, salads and cheeses