A Jura Chardonnay from Rolet

Published 11. May 2018 by Vidar Kenneth Johansen

Here is another tasty Jura playing with oxidation, this time from Domaine Rolet.

Rolet is found in the historic town of Arbois, Louis Pasteur’s homeplace. The domaine was created in 1942, and with 58 hectares it’s now the second largest producer in Jura. The founder’s four children are now running the domaine.

Key words have always been traditional organic farming, ploughing, hand-harvesting (in those steep slopes), ripe grapes, fine-tuned use of wood, and controlled oxidation to obtain what winemaker Guy Rolet calls “a little hazelnut nose”. In fact some have called Jura’s white wines something between a burgundy and a manzanilla sherry.

This wine was fermented and aged in wood barrels for between one and two years. 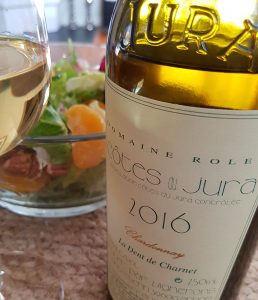 Deep yellow. Intense aroma, nutty, buttery, with lime and some salty tones. Full and rich with a good tannic grip, and decent acidity.

Normally this oaky character could have been too much, but it’s something with the lightly, controlled oxidized style and the power that makes this work. Furthermore it’s better after some days in the fridge.