I had just read about the wine bar that Pedro Caiado opened six months ago, when he phoned me to ask about one of the producers that can be found in several posts of this blog. But it was only yesterday that I got a chance to visit his Portuguese place. 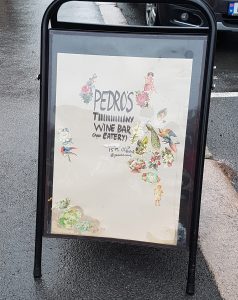 Let’s just conclude that he has managed to establish a fabulous place. It’s the kind of wine bar that I like, with a strong focus on natural wines, and small, well-elaborated bites to go with them. Quite unusual is that the food also is mostly organic, and from local producers.

Pedro is from the Portuguese surfer’s paradise of Peniche, where the winds always blow. But love, what else, brought him to Norway. When I was there he was accompanied by Lise, newly employed, who hails from northern Norway, but has been living abroad for many years, mostly London. Lise has specialized in fermenting, she uses it in some of the dishes, and is also planning to offer courses. 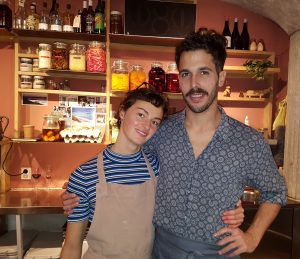 The wine list obviously contains Portuguese producers, such as Conceito, Aphros, Mouraz and Pellada. But there are also some of the classics within the natural wine world, such as Cornelissen (Sicilia, Italy), Gut Oggau (Steiermark, Austria), and the French Matassa, Ganevat, Riffault and Robinot, all of whom (Portuguese and “foreign”) should be known to readers of this blog. And there are also up and coming names like the Spanish Ismael Gozalo, Alfredo Maestro and Bodegas Cueva, also well covered here, and Chapuis Frères (Bourgogne, France) and Stekar (Slovenia).

It was a late Friday lunch, and I was going to a jazz jam with dinner immediately after this, so I limited myself to three wines from the by-the-glass selection. To go with them Pedro suggested eggs in olive oil with fresh sour-dough bread, ricotta with basil, sunchokes and stingray.

I came a short while before they actually opened after the break, so I was offered a cup of coffee, a fresh African highland style selected by Norwegian barista Tim Wendelboe.

The first wine was from Moravia, Czech Republic (see a recent post). Gewürztraminer 2017 (Krásná Hora), a 6 months skin-contact white. Not straigh white, that is, it has a red-ish hue. The aromas include gooseberry/raspberry, citrus and some rhubarb, and it has quite concentrated flavours and good acidity. 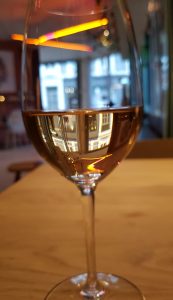 Next out was Nat Cool 2016 (Niepoort). Niepoort is “everything” in Portuguese wine: The house is a traditional port wine producer, and as such a star within several categories such as colheita and garrafeira, but really not bad (read: average) in the other styles either. Dirk Niepoort has taken it further, and has now establish himself as a top in several Portuguese regions, and abroad too, like the neighbouring Ribeira Sacra of Spain, and in Austria, as his former wife is from there. This wine is from Bairrada, from the variety baga, made in cement. And it’s really is cool: Light cherry red, almost rosé, smells of strawberry and raspberry, and it has a light touch of tannin. It was served chilled too, which is a good idea. 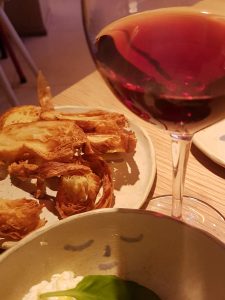 A cool bairrada with ricotta, basil and roasted sunchokes

Vale da Capucha is the producer I talked about in the beginning, so it was only natural that I ended this session with a wine from my friend Pedro Marques, who runs that winery. Fossil Tinto 2015 is the current vintage of this touriga-dominated blend, that also exists in a white version. Fossil is an appropriate name, as the winery is located in the Torres Vedras area of the Lisboa region, only 8 km from the sea, and was in ancient times under water. Dark red, smells of dark and red berries, herbs, and it’s a little spicy too. In the mouth it shows a fine, natural, integrated tannin grip and ditto acidity. 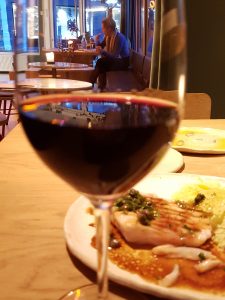 While sitting in the inner side of the bar I could see Pedro serve all kinds of customers with true respect and patience. I have the greatest confidence that this tiny wine bar has a future place in a city with many good restaurants and bars already.