Fanny Sabre has in short time, and at a young age, become a respected producer in Bourgogne. After her father passed away in 2000, she and her mother have run the family domain in a magnificent way. (Read about another wine here, also with an introduction.)

Today she manages the 5-hectare domain from her cellar in the heart of Pommard. And the grapes for this week’s wine are sourced from plots in that commune. We enjoyed the wine at “the wine office”, Vinkontoret, in Stavanger, Norway.

Like for all her reds she has here used 100% whole clusters and matured the wine in mainly 400 liters and mostly used and partly some new barrels.

Beaujolais is back. The local people brings it back on the squares of central Beaujolais after two pandemic years. And as usual, from the third Thursday of November it’s arrivé here for us to enjoy.

One of the best I have tasted this year is a Beaujolais-Villages from Château du Chatelard. The château was first owned by the Tournus abbey of south Burgundy in the 12th century. Today the labels carry emblems of the families that have developed it further.

The actual 28 hectares were mainly established before 1955. They believe in integrated farming and grass cover of the parcels to preserve the soils and the biodiversity.

Aurélie de Vermont is now manager, and as winemaker she sticks to local traditions. She selects micro-cuvées from the many terroirs of both their Beaujolais and Mâconnais vineyards.

Typical for the area, low temperature semi-carbonic maceration is used for the nouveau. This means that whole and partial bunches of grapes are vatted and the alcoholic fermentation starts inside each grape. The low temperature allows a longer winemaking process (more than 10 days).

Philippe Pacalet is one of the most talented négociants. Operating from Beaune since 2001, he works with growers from many parts of Bourgogne. He is not the type that buys in wines, but he works closely with the farmers, giving them his advice, buys the juice and follows and elevates the wines, so that he can put his stamp on them with his greatest confidence.

He tries to minimize the use of sulphur (and only before bottling), but his wines are still ageworthy. He never uses new oak, so there is never any disturbing oakiness. 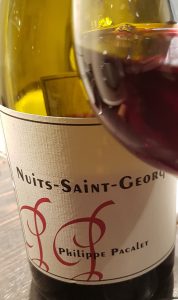 During the latest years he has been looking outside Côte d’Or, such as Cornas, and he has even bought his own vineyards in Chénas and Moulin-à-Vent, Beaujolais.

He was the one who helped Fanny Sabre out in the beginning (read more here).

Château de Béru is located in the small village Béru, to the east of Chablis town. It has been a property of the family of the same name since the 15th century. Athénaïs de Béru has been in charge since 2004, and now cultivates 15 hectares according to biodynamic principles.

Montserre is made from a single vineyard on the flatlands of the valley, where the soils contain mainly limestone with fragments of rock.

This wine was spontaneously fermented, then spent 3 months in steel and 3 months in old oak vats. There was no fining nor filtering, and no sulphur was added. 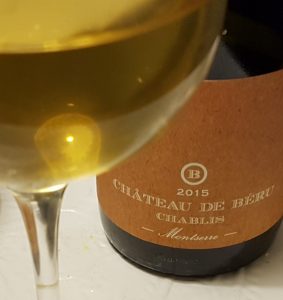 Dark yellow, orange tones. Developed aromas of mature yellow fruits (mandarins, yellow tomatoes, mango), and a slightly bitter peel tone. Round and tasteful, quite powerful, and with a balancing acidity. A cool wine from a warm Chablis vintage.

Food: A variety of fish (both red and white) and seafood, salads, tasteful cheeses, try with lightly spiced food too

Fanny Sabre was thrown into the vineyard, so to speak. Studying law at the university, her father suddenly died, and she took over the estate. Soon she discovered she actually liked the work. In the beginning she got help from Philippe Pacalet, natural wine guru in the area. It was adieu to conventional farming for good, and soon Fanny was ready to walk the path alone, carrying out most of the tasks herself.

Once here stood a local fort, and you see that here is too much history to dive into in a short note like this. So we come back to it in a later post.

Manual ploughing is employed, and no herbicides are used. Red wines, like this one, undergo whole-bunch maceration in concrete vats. Indigenous yeasts work, before the wines are aged for at least a year, without racking or fining and with only one very light stirring. Then they are transferred to stainless steel vats for three to four months, and lightly filtrated. 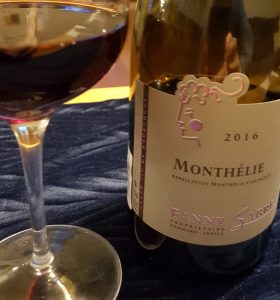 Light, brilliant red. Floral nose, with red berries (raspberry, strawberry), dark cherry and a dark minerality. Quite juicy in the mouth, yet concentrated, with supple berry notes, young and firm tannins, and a fresh acidity.

Nights at “The Office”

I think it’s common not to visit sights and attractions close to your home, because you can always go – some other time. This may also be the case with bars and restaurants. Stavanger, Norway (in my own backyard, so to speak) has got its first decent wine bar, and then it should take three months before I managed to get there, and then quite by chance, while I was waiting for a party to start some other place in downtown Stavanger.

Once inside, I meet an old wine-mate Emil Heimdal behind the bar, and then I know we are talking “serious business” here. I know him from several restaurants over the years, and this is a man with passion for wine and real dedication. Emil took over the wine section of this bar, now called Vinkontoret (The Wine Office), together with Christoffer Ingebretsen. They have no purchase agreement that binds them, so they buy exactly the wines that they want and now collaborate with about 30 importers. They use the Coravin system, which allows them to serve anything by the glass. Here you can buy smaller units than a whole glass and pay less, so you can taste more wines during an evening.

They can literally offer hundreds of wines. They have a list that is heavy on traditional wine regions such as Burgundy, Rhône, Alsace, Mosel, Rhine, Piemonte, Tuscany and … say west-of-Vienna Austria.

But these people are just as crazy wine freaks to throw in almost anything you can think of.

As for grapes, of course they offer cabernet, merlot, syrah and such, without being “ashamed” of it at all (as if that would be something to regret). If you look carefully at the list you will see some “oddities” like a manzoni from Trentino, a kékfrankos from (why not) Austria, and you can get the “Pornfelder” if you like, Lukas Krauß’ German blend of portugieser and dornfelder. But most of all it’s a focus on the classic grapes here, even from not-so-classic countries.

There was a time when Stavanger was more in the avant-garde of the Norwegian culinary movement, when the oil industry was booming, and the most important gastronomic educational institutions were located there. Today there is no doubt that the hegemony is in Oslo, and that every initiative like this deserves a warm welcome.

Emil and Christoffer also have a small selection of handcrafted beers, like lambic and geuze. (Bear in mind that one of the country’s best beer selections is just across the same narrow street, at Cardinal bar. So this is obviously not their biggest priority.) The wine selection must be best in town. I am not sure if the wine list is the longest, but there are several hundred references, and mainly wines to drink, no show-off crazy over-priced stuff.

Here are just a few picks from my first brief visits.

 Here is a riesling spätlese trocken from the Ökonomierat Rebholz of Pfalz, the Rebholz 2008. It proved to be a rich and honeyed wine with a thick texture and great acidity. To the right is a Gevrey-Chambartin, the Rossignol-Trapet Clos Prieur 1er Cru 2008 from Domaine Rossignol. It shows a clear ruby, somewhat developed colour, and smells quite aerial og cherry and plums. The tannins are still evident, and the acidity is well integrated. The actual vintages of these wines on sale are 2012 and 2013, respectively. So come here to get the wines closer to their peak.

Here is a wonderful pinot noir called Nature 2015 from Alsace producer Rieffel, now with Lucas and André in charge. Today the estate covers 10 hectares, all organic certified. The 30 year old vines are planted in soil of clay and alluvial sandstones. The fermentation is spontaneous and goes on for seven months in 228L barrels. It’s really fresh, juicy and quite full, with just enough structure to match a wide variety of food. After this I wanted a red with darker fruit, and I suggested syrah. On the counter was a Stellenbosch syrah, that was already opened, so I went for that one. The Liberator The Francophile 2015 (Dreyfus Ashby) was ok; a somewhat warm blackberry fruit, earthy with some spice, mouthfilling with rounded tannins.

The door is permanently closed at The Office (Kontoret). The Wine Office has opened.

Here is a crispy and lively Crémant de Bourgogne, from 20 years old chardonnay grapes organically grown 80 above sea level in the commune of Serrieres.

The grapes were hand-harvested. This wine underwent a malolactic fermentation, and the wine had a period of 15 months of secondary fermentation and ageing in bottle, that gives it some depth.

Straw yellow. Green apple, lime, a touch of bread and yeast. Crispy, almost dry (towards the drier end of brut) and a nice acidity in the aftertaste.