Caprices in the Douro

Folias de Baco was one of the greatest revelations at the Simplesmente Vinho fair. It started at the dinner in Porto’s Typographia Progresso restaurant, where we were served the Uivo Pet Nat 2017, a joyful start of an inspiring evening.

The word folia evokes something merry and bright, joyful, and capricious maybe. And this can be a first impression of Tiago Sampaio’s wines. But behind this is yearlong studies and hard work. 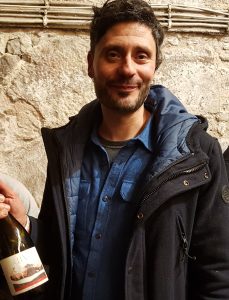 Tiago Sampaio with the Uivo Renegado

He is based in Alijó in the sub-region of Cima Corgo. This has traditionally been a stronghold for Moscatel wines in the Douro, and his parents delivered to the famous coop in Favaios, maybe the leading producer of wines of that kind in the past. Here Tiago mixes tradition with new ideas and what he learned in his studies. As an example, his love for pinot noir derives from his studies in Oregon.

His Uivo range was created in 2016. With these limited editions he wants to explore alternative vinification techniques, discover the potential of varieties, but never forgetting tradition. The Uivo Renegado Vinhas Velhas 2017 is a field blend of both red and white grapes (around 50/50%). This, and because of the turbidity, makes it impossible for him to bottle it under DOC. It’s made with whole clusters, foot-trodden and with four days of skin-contact.

Light red, cloudy. Strawberry, raspberry, some vegetal/herbal elements. Smooth and glyceric, but with some structure and with a hint of grapefruity bitterness in the end.

Food: Tasty fish and shellfish, and I would believe perfect for a smorgasbord (smörgåsbord in Swedish)

A Syrah from the Rhône Ranger

Here is a syrah from Randall Grahm, who has called himself a Rhône ranger. Always enthusiastic, Grahm of Bonny Doon Vineyard never stands still. But his love for the grapes and styles from this French valley never dies. 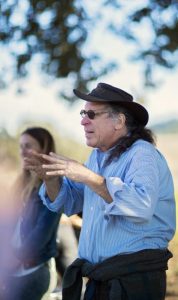 Grahm says this vintage was exceptionally cool and elegant in the Santa María valley of California. He uses more whole clusters than before for this wine, and the stems add to the freshness and herbal character. 25% were not pressed. Natural yeast, 4 days fermentation at controlled temperatures. Then 18 months in French oak. 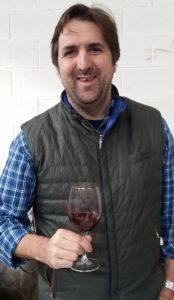 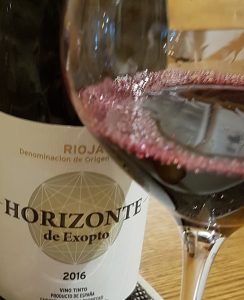 I’m in Rioja visiting some producers on the right bank of Ebro. It’s then only natural to stay in the capital of the La Rioja region. Guardaviñas is a relatively new venture in Logroño’s old quarter. It’s run by Alberto Ruiz, who has lived in London and operates La Cava de Pyrène, a branch of one of the organizers of the Real Wine fair. Guardaviñas is different from most others in Logroño, including the bulk of wine-holes along the tapas trail. Alberto’s place specializes in wines from small artisan producers, mostly local, but also some from other parts of Spain and the world outside.

I love these places where you order a couple of wines, tasty small bites to go with them, and after a while a collaboration starts between the sommelier and you. He or she maybe comes up with some more glasses of odd wines, often from un-known producers. Here I opened with Ijalba Maturana Blanca 2016, a light yellow, clean and correct organic certified wine from Viña Ijalba (just outside Logroño), a pioneer in the area. Then my waiter, formerly sommelier at Michelin star restaurant Echaurren, came with a really interesting bottle, Viña el Pago 2014. This is a garnacha blanca from Azpillaga Urarte. The natural wine movement hasn’t taken off in Rioja. But here is a no-nothing added wine with extended skin-contact from Lanciego (Lantziego), Álava. The colour was yellow towards orange, and the aroma showed mature apples, white flowers, some peel, and in the mouth it was full, a bit honeyed, but with decent acidity. 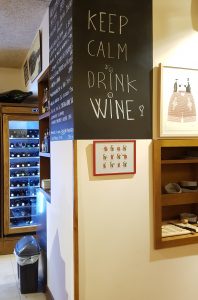 The kitchen delivers both small pinchos, somewhat bigger raciones and full dinner. The influences are from several places, some from England (as Alberto’s wife is from there), from Spain, and from a variety of modern cuisine. And there is something for everyone, vegetarians and vegans too. I had croquettes of jamón ibérico, foie with fig marmelade and filet of ecologic pig, from a nearby farmer, served with red peppers and fried potatoes. The first two were smaller and served at approximately the same time. The wines arrived one by one, and I felt at home, made myself comfortable, and tried a new one before the previous glass was finished. So at a time there were two dishes, four glasses and a lot of bottles at the table. There was a great deal of flexibility here, so you could really “keep calm and drink wine”, as a cardboard sign tells you to.

Viña el Pago, natural wine from Rioja Alavesa
The third wine was kindly offered by my waiter, who has a special interest in it. A carbonic maceration, vintage 2017, the kind of wine that Rioja made a lot of in the past. This wine, from producer De Luís R (also Lanciego), is not organic -yet-, and not very expressive, but well on the fruity side and showed nice violet and blueberry tones, and some tar.
Next wine was a beauty, again from Lanciego municipality, but the small settlement of Viñaspre, further up the road when coming from Laguardia. Some will have guessed that it’s from the new star Roberto Oliván. Xérico Viñaspre 2015 (Tentenublo) from mainly tempranillo, with some 10% of viura, white grapes: Brilliant stuff, dark cherry red, the aroma is very expressive, both flowery and with a lot of berries (blackberry, blackcurrant) and with some earthy notes too. It has a concentrated fruit expression, lots of rounded tannins and lovely fruits all the way in the lingering finish.

The fifth wine was Horizonte de Exopto 2016 (Exopto), one of Frenchman Tom Puyaubert’s contributions to the new wave of terroirdriven Rioja wines. Dark, dense, with blackberry, blackcurrant, a second layer of roast and subtle vanilla in the background. Good concentration, young tannins, very fresh, still in its youth, and will keep for long, but I love it already. Read more in the wine of the week column.

There was in fact a sixth wine, served blind. The waiter revealed that it was the same Xérico as before, but while the former had been opened two weeks ago and served by Coravin (you know that needle and gas system whose aim is to keep the quality of the wines after taking out a tiny quantity), this one was just opened. One could hardly reckognize it as the same wine. While I preferred the fruit in the former, he liked the latter better. I think it has to do with the slow airing in the Coravin version.

There was jazz on the air, from I arrived untill I left: Reed greats like Charlie Parker and Benny Goodman, then Glenn Miller taking over. “My favourite things” in a trombone version when our “improvisations” were over and I was about to leave. All right, I thought as I walked into the cool Logroño spring, now at least I have revealed some of my favourite things. As a joke it was not that funny, but it was absolutely true. 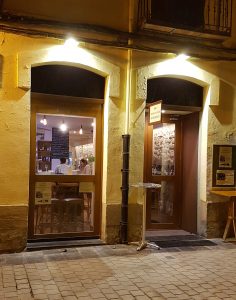 1701 was the first certified biodynamic producer in Franciacorta. I met Rhona and Federico at the Real Wine fair last year, and I tasted the Brut again at a London wine bar recently.

They are located in an old magnificent villa near Cazzago San Martino, Franciacorta, and the property includes around 10 hectares of vineyards.

The production is low-intervention, with no dosage and sulphur only when absolutely needed.

This wine is a blend of Chardonnay 85% and Pinot Nero 15%. Whole bunches are put into stainless steel, and the secondary fermentation takes place in the bottle, as usual. It stays 30 months on lees before the final bottling. It’s just lightly filtrated.

Light yellow with green tones, creamy mousse. Fresh aroma of citrus, mature apples, with some chalky, mineral notes. Appealing, fresh fruit in the mouth, and an acidity that contributes to the lingering finish.