Former maths teacher Francesco Carfagna is the owner of the Altura winery on the island of Giglio off the coast of Toscana. It has become a popular tourist destination, but only 600 people are actually living there.

Carfagna has himself revived the former traditions, and makes wines from indigenous grape varieties farmed biodynamically. It’s especially the ansonica (sic!) that has seen a revival in the hands of Francesco. As for today he is the only one who bottles his own wine.

This wine was included in a recent tasting of lesser or -for many- not known varieties. 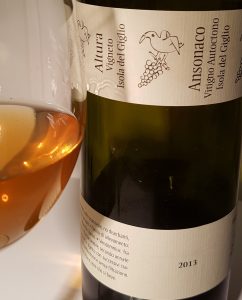 The wine comes under the designation DOC Isola del Giglio. The soil is sandy granite, and the plants from the small vineyard are of various ages (20-80 years). It’s spontaneously fermented, aged for up to a year in steel tanks. Unfined and unfiltered. Low-sulphur (less than 30 mg/l).

Many people think of Col Fondo as some kind of an old-fashioned, or sometimes, low-intervention/ high-quality Prosecco. But the term is not restricted to that area.

This one is from Emilia-Romagna further down south. It’s made from the grasparossa grape, organically grown. It underwent a natural alcoholic fermentation in steel, with the second fermentation in the bottle.

An Escoda red at Bar Brutal

I am in Barcelona for two natural wine fairs (Vins Nus and Vella Terra). And I have just finished a well-prepared meal at the city’s perhaps most iconic natural wine bar Brutal. And what could be more appropriate than to have one of Joan Ramón Escoda’s wines as this week’s pick? 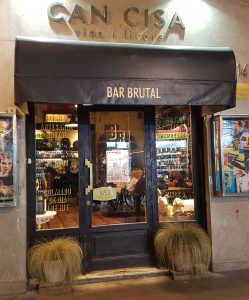 Joan Ramón is one of the owners, and he was the one who brought my attention to this fabulous bar a few years ago, though he has no active role in it. 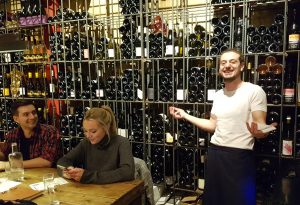 Small plates like tuna tataki and ‘sweetbreads’ (here: pig’s cheeks) and cecina de vaca, lightly smoked ham from cow, were accompanied by several wines: An inspiring, fresh, yellow, barrel-aged xarel.lo Essencial 2017 (J. Rubió) from Penedès, Qvevri, a full thick, earthy, sauvignon blanc from Loire, with some residual sugar (made by a distributor of Georgian wines in France), a terret-dominated blend called Rouge fruit 16/ Rouge de Causse 15  (Petit Gimios), a dark, green herb-scented Minervois. To round off it all I had the floral, yellow and rosa-hued Súpertock Ancestral (Bodegas Cueva), a fresh valencian pét nat from the tardana grape.

But in-between: A timely reunion with the following wine. 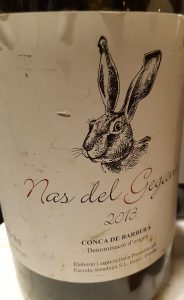 The owners have grown their grapes organically in the Conca de Barberà since 1996, biodynamic since 2003 and without additions of sulphur (or anything else) since the 2007 harvest.

This wine is made from the varieties cabernet franc, cariñena, garnacha tinta and merlot. It stays 10 months on the lees in inox, and clocks in at a relatively low 13% alcohol.

Nas del Gegant 2017 (Escoda-Sanahuja)
Dark red. Cherry and blackberry aromas, with flowers and a mineral touch. Lively in the mouth, with a fresh acidity. 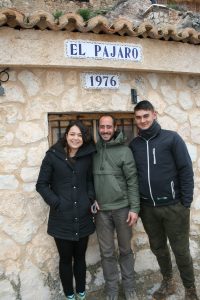 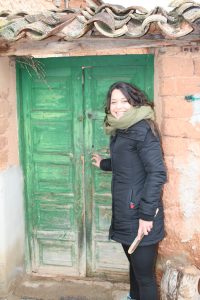 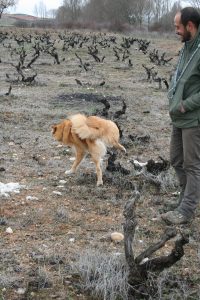 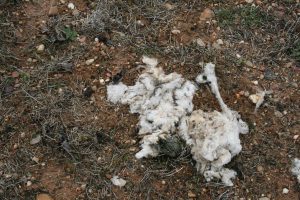 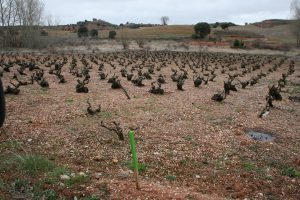 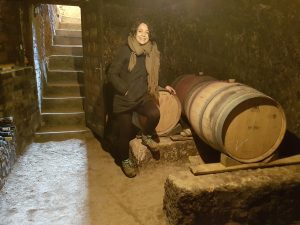 “We always wanted to know what essence came from those grapes of century-old vineyards, that tasted so good”, says Ana, “and that also in oenological parameters they reached optimal points. When we in 2011 were given the chance to start this project, a dream had become a reality.” 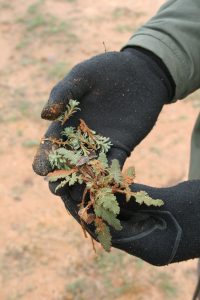 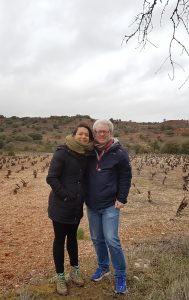 Éric Texier’s Chat Fou (‘Crazy Cat’) is a long time favourite. (Here is the 14 vintage, and here is another wine-of-the-week entry by Mr. Texier.)

Texier has a natural approach, and his wines are always clean and pure expressions of grapes and terroirs.
This vintage was tasted at London’s RAW fair in March 2018. It’s made from a typical Rhône blend, mainly grenache, but with some 10-15% of white grapes, that add to the elegance. Destemmed, spontaneously fermented in steel, matured in used barrel for 10 months. No sulphites added. 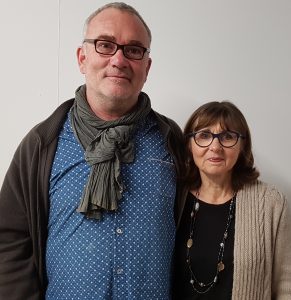 Éric and Laurence Texier at the RAW fair last year

Dark cherry red. Aromas of red fruits, raspberry, cherry, chalk, and slightly spicy. Juicy, luscious on the palate, with a touch of fine tannins, just enough acidity, and in fact quite long.