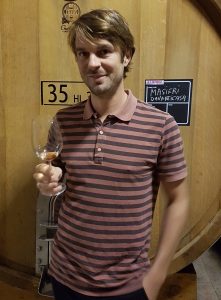 Back in time: Viña Tondonia

It was in the evening of the Haro Station Wine Experience. Lunch was over and I was walking around in the streets of the Barrio de la Estación, where many of the leading bodegas establish themselves after the railroad came to town and a new area started, with Rioja as a leading brand and Haro as its capital.

I decided to step into the mythical bodega and there stood María José López de Heredia opening a mysterious bottle. I didn’t know exactly what it was when she poured it. But indeed I understood that it was a white Tondonia and that I had stepped back in time. 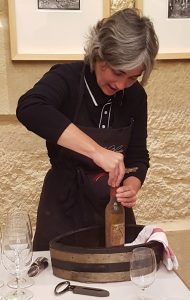 López de Heredia’s wines must be one of the most legendary in Spain, and well-known for being made the same way since the winery’s foundation 130 years ago.

Only grapes from their own vineyards are used, for this wine one from their most emblematic Viña Tondonia, a 100 hectares pago not far from the bodega. The soil is clay with a high limestone content. It’s a large vineyard with varying plantings and grape varieties, but average age is around 50 years. The cultivation is organic.

To get the fermentation going they simply wait. And if it looks like it’s going to be difficult one can only open the windows, as in Haro there are often big differences in night and day temperatures. 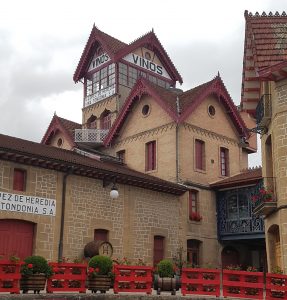 Art nouveau, a building style in fashion at the turn of the century

The wine is made from 85% viura, 15% malvasía and has 12% alc. It stayed 6 months in wooden deposits, then 9 years in old barriques of American oak, treated in the bodega’s own cooperage. It was racked manually 18 times, then clarified with egg whites. It was then bottled from the barrels in July 1973 without filtering. 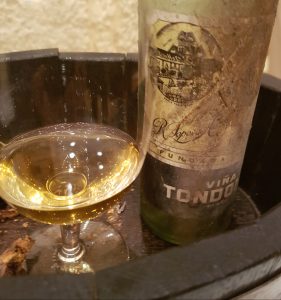 Golden colour towards amber. Notes of dried fruits, toasted almonds, citrus and a touch of honey (without the sweetness, if that makes sense). It’s almost like walking in an old sherry bodega. Glyceric and rich, with a smooth texture. Low alcohol, high natural acidity, and a salty finish. But even if there are other barrel-aged whites this is almost in a category of its own.

Price: High (if you can find it at an auction)

Lastly, the bodega is always referred to as a very traditionalist bodega, and rightly so. Here is how they define their form of traditionalism:

I’m in the Spanish capital again, and a visit to the Angelita Madrid seems very appropriate. Having not booked a table on a weekend’s night will most often mean that the only option is a place in the bar. Which is nice. This time I was sitting next to Federico, a young Argentinian who runs the splendid Acid Café coffeeshop in the museums area (Prado). 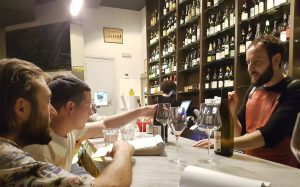 I will come back to Angelita and their extensive list of artisan and natural wines by both glass and bottle. This week’s wine is an orange wine from Zamora, that I hadn’t tasted before. The winery is found in Villamor de los Escuderos, south of Zamora town, not far from Salamanca.

The wine is made from godello 50% from centenary vineyards, and albillo real from new plantings. The soils are stones and sand over clay. Height above sea level is 800-900 m.

The producer says that this is a modern variant of the ancestral “embabujado” technique, that is, wine made with all its components. The grapes were partially destemmed before fermentation that finished it in oak barrels. It has not been clarified and it has been bottled after a light filtering to remove turbid. Total So2 is less than 6 mg/l. 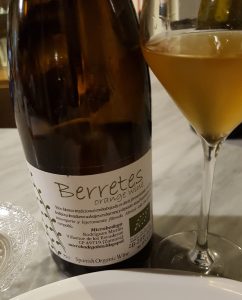 Best served at around 16ºC

A Burgenland CF at Sentralen, Oslo

This week’s wine was served at Sentralen wine bar and restaurant in Oslo’s city centre. The huge building used to be a bank, but is now containing cultural scenes and various meeting places, such as Sentralen, with its two chambers. It’s an informal place, but several well-established chefs are in the management, so the quality is high – and the prices very cempetitive too. The wine list has focus on artisan producers and organic and natural wine.

Christian Tschida is fourth generation and cultivates 10 hectares of old vines in Burgenland, near the Neusiedler See. The vineyards have sandy gravel, schist and limestone, and the big lake is securing a moderating influence. The wines are generally in contact with oxygen for a long time, up to 5 years in old  wood. He uses a vertical basket press that he likens to an old manual screw press, with its very light pressure. The grapes are foot-trodden, and the fermentations done outside in the shade, then moved inside to age in barrels. They are never racked, and bottled by hand to leave a little redisual carbon dioxide.

While the previous vintage of red “Heaven on Earth” was made with cabernet sauvignon and zweigelt, the 2014 is a pure cabernet franc. The grapes were destemmed, and the juice fermented with indigenous yeasts, as usual. This wine spend one year in 500 to 1.500 liter barrels, and was bottled without additions of sulfur, and according to Tschida’s principles, not fined or filtered.

Food: I had it with quite difficult ingredients (smoked and spicy), as you can see above. It should also tackle a wide variety of food, from light meat and bacalao, to salads and cheeses 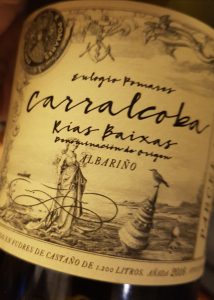 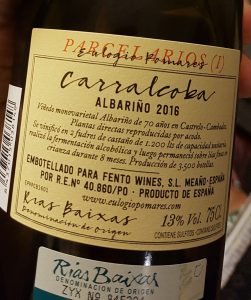